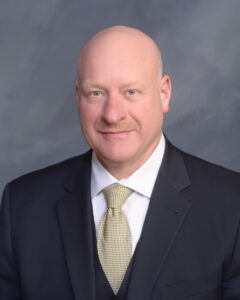 David is admitted to practice in Michigan and various federal district courts. He is a member of the State Bar of Michigan, and several sections: Marijuana Law, Public Corporations, Administrative & Regulatory, Labor & Employment Law, and Alternative Dispute Resolution sections. David is a member of the Federal Bar Association, Ingham County, Kalamazoo County and Calhoun Bar Associations.

Before joining the McGinty firm, David formed the Revore Law Firm, PLLC, and was a shareholder of the Thrun Law Firm, P.C. Prior to entering private practice, David served in law enforcement and earned the distinction of Michigan State FOP Peace Officer of the Year, Michigan Association of Chiefs of Police Medal of Honor, Medal for Bravery, and the Sheriff’s Award for Excellence. In addition, he received recognition from the Federal Bureau of Investigation and the DEA. David is a past-president of the Kalamazoo Area Fraternal Order of Police.

David and his wife Mandy live in the Marshall area where they are active in the community, hiking, biking, and SCUBA diving throughout the region.